We are sometimes sooo smart. We booked a later flight and got a late checkout so we could take our time. We just got back from touring Temple Square. We learned that there were three main buildings, the Temple that is off limits to non Mormons. Then there is the tabernacle where the music is, and there is the church where all can worship. We were guided by two sweet “sisters”. One from Taiwan and the other from Tahiti. They were here serving for eighteen months. It’s freezing here this morning and we understand Nashville has rough storms. Heading home anyway. Ready to see the families and get back to our daily routines….until the next adventure. Until then Thelma and Louise are signing off. Hope you enjoyed our adventure.

Last night we saw this beautiful rainbow. It was awesome because you could see the whole rainbow!

The temple grounds were covered with beautiful spring flowers. 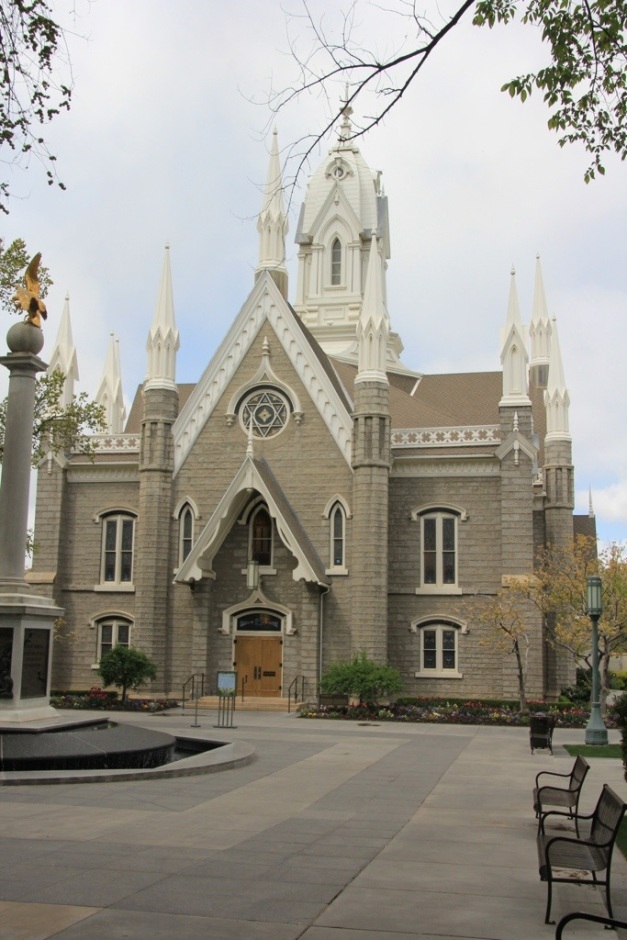 This is the church where they go to learn. 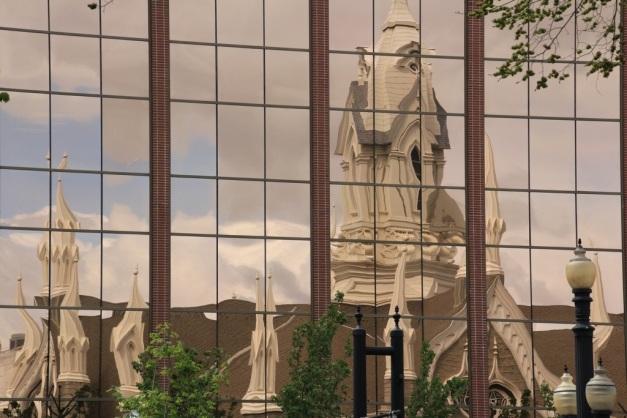 Saw the reflection of the church in a window across the street. Thought it was a cool abstract. 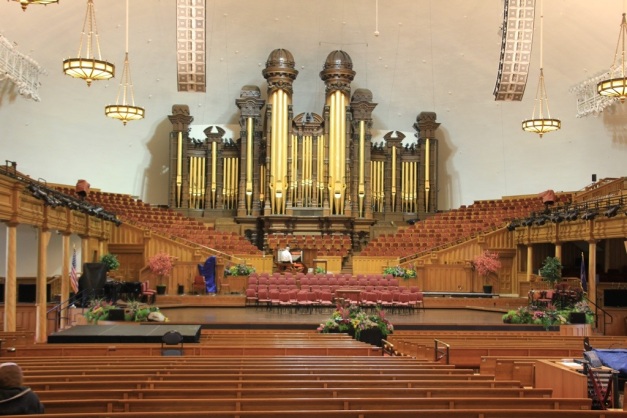 Attack of the Zombie Gnats

Today was a sleep late day. We have decided that what we do is not a vacation. The word vacation seems to imply rest and we do not. Adventure is more our speed. So we drove in to Salt Lake to give ourselves a day to recuperate before flying home. That being said, we drove out to Great Salt Lake and to Antelope Island State Park. Well worth the trip, except…. Lynn read online that the gnats were hatching. So what did this mean to us who are not familiar with gnat hatching? The park ranger told us as we entered that they hadn’t really come out yet. Yeah right. We parked and got out of the car to walk down the rocks to the lake. Suddenly my head was itching. I didn’t see any gnats. Then I saw lynn scratching her head. Still didn’t see any of the blood sucking things. Well they were there, everywhere! The visitors center even sold the netting hats. Did we buy one, of course not. But we trudged on. It was well worth the trip out. There is a working ranch and bison that roam the island freely.
Back at the hotel now trying to figure out how to get all the goodies that we accumulated home. We’ve already mailed four boxes of rocks home! We will have some dinner and in the morning plan to see the Mormon Tabernacle before going to the airport. 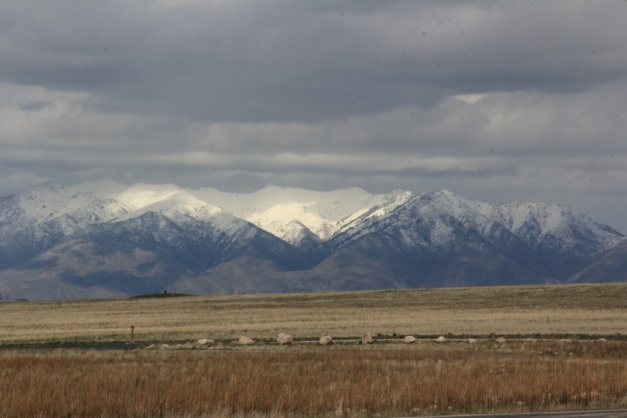 Antelope Island and the Salt Lake

Bison roam the park freely. Beware, they do not look both ways before crossing the road. 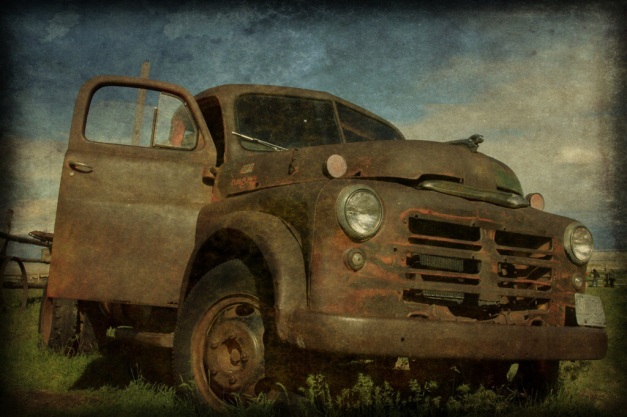 The ranch area was an outdoor museum. This old truck caught my eye along with some other farm equipment.

We awoke to the wind shaking our luxury tent. The wind we were told, can get pretty fierce. They told us when we checked in and signed a waiver stating that we would not hold Moab Under Canvas responsible for anything, that the wind could get so bad that they would ask us to leave the tent and ride out the storm in our car! It didn’t! The sky was cloudy as we packed up to head out for Salt Lake. Last stop on our list was Canyonlands National Park. It is a vast park about 30 minutes from Moab. It is divided into three sections and is considered very primitive. Our plan was to only see the area we could drive to because our trip to Salt Lake would take us four hours. We did stop at Dead Horse State Park and were not disappointed with the breathtaking views.
The drive to Salt Lake was along state highway 191/6. I did remember something about Soldier Summit being a mountain pass. I actually lived in Dugway, Utah forty or so years ago. The landscape changed again and memories flooded in. Why did I not appreciate this spectacular and surreal land then? Oh, right, I was 19 years old!
So here we are at the Hilton Garden Inn, five blocks from the Mormon Temple, savoring the last day of our adventure. Tomorrow, “Thelma and Louise” head back to Tennessee. We will see what the city has to offer. I know it will be informative and fun.

View from our desert tent, a few clouds or rain won’t stop us. 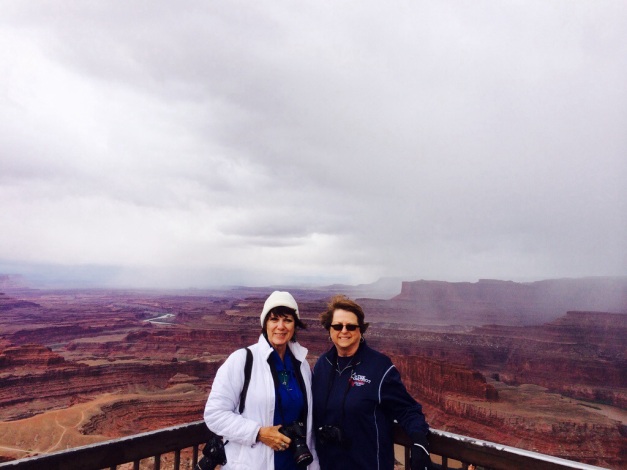 The view went on for miles! They call this a “mini Grand Canyon” ….

The weather changes at the drop of a hat. Here comes the rain. You should’ve seen the people scatter! 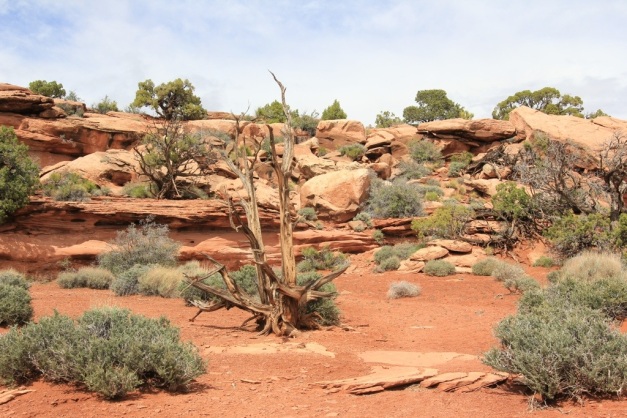 Canyonlands is next. The visitors center is called Islands in the Sky. We realized the road was actually on top of the Mesa with the canyon on both sides. Lynn does not like heights but she was amazing and drove us through.

We were fascinated with the clouds. You can see forever out here.

Photo taken from the car while approaching Soldier Summit, yes that is snow!

Ok, this was taken from the car on the interstate, but the sun was shining through the clouds in the most ethereal way. Too bad we were on the interstate because my best friend will always stop for a photo if we can. She’s the best!

Arches is one of the most exciting parks I have ever seen. I know you’re thinking, “how many rocks can you look at?” For me, there are always more rocks. After all Lynn and I have mailed two boxes each home already. Love rocks, always have. What fascinates me is how different they all are. How long did it take our Creator to sculpt a formation we named, “Three Gossips?” Wind and weather and time have sculpted these rocks, we have given them names. We started out to just scan the park and come back later. Ha Ha. During the course of the day we did short hikes and by the end of the day I did the hike to Delicate Arch. Note, I am a walker not a hiker and Lynn is terrified of heights. I kept hearing little whispers in my head for weeks, “get out of your comfort zone.” Little over 3 miles, not bad if it was flat, but at the end I felt like I had climbed my Mt. Everest. It was spectacular. Check out the photos below.
Then we had dinner at Sunset Grill. It was the original home of Charlie Steen who was one of the major uranium kings of Moab in the 1950’s. Food was a Incredible and the house sits high on a hill with incredible views.

This was part of the climb to Delicate Arch, across what they called Slick Rock. Note the road down to the parking lot.

Toni at the arch. I felt like this was such an accomplishment. For me it was like climbing Mt. Everest!

Lynn has become the avid rock hound. She loves the green rocks.

Can you see Moab below?

Our tents are quite special, no electricity or wifi, but we have water and a wood stove. Brrr, the first night it was cold, but they provide lots of warm cozy blankets and comforters. We woke up and Lynn started us a fire. We noticed a leak in or little shower. I had to walk to the office tent anyway to get coffee, and they laughed when I told them about the leak. Apparently it is a freeze valve that keeps the pipes from freezing soooo, it got cold!
We loaded up and took off on a scenic drive through the La Sal mountains and valleys. Wow what a drive, 27 miles in two hours, or more! We ended at Castle Creek Winery. After that we drove a short scenic drive that ran along the Colorado river, picnic time. Of course we went to the post office to mail more rocks home. Lynn is the queen of finding petrified wood.
It is weird being behind on the blog. We are back at Peace Tree eating breakfast and using wifi.
Yesterday was Arches National Park but that is a blog all it’s own.
Enjoy the pics.

Our deluxe tent on the desert facing Arches.

Putting on make up on the front porch.

Through the canyon by the Colorado river.

All along the canyon/river road people were building houses in the mountain!

End of the canyon at Moonflower where I played my flute for the ancestors.
That’s a reflection of the rocks in the water.

Made it to Moab

Cell signal iffy, wifi iffy, scenery always spectacular! Ok we are behind again so it’s catch up time. We left Boulder on Wednesday down scenic highway 12 to highway 24. We ventured down Long Canyon Road to find a slot canyon. All the other slot canyons require a strenuous hike and even climbing gear. This one worked for me, short walk not lots of climbing. From there to Capitol Reef where there was a little community of sorts. It was settled by Mormons and known for the fine orchards that are still in operation. The Gifford House serves wonderful pies and scones. Capitol Reef was not established as a national park until 1971.
Then on to Moab. The trip took us over a 9600 ft. Summit with a little snow and gorgeous aspens. We took a detour (imagine that) through Goblin Valley
State Park. What a cool place. Talk about nature as art. These little guys all had names after we left. We got to Moab around 4:30. Checked in to our glam ping and went to town for dinner. I have never stayed in a tent so….

Gifford House and the beautiful rocks at Coral Reef. 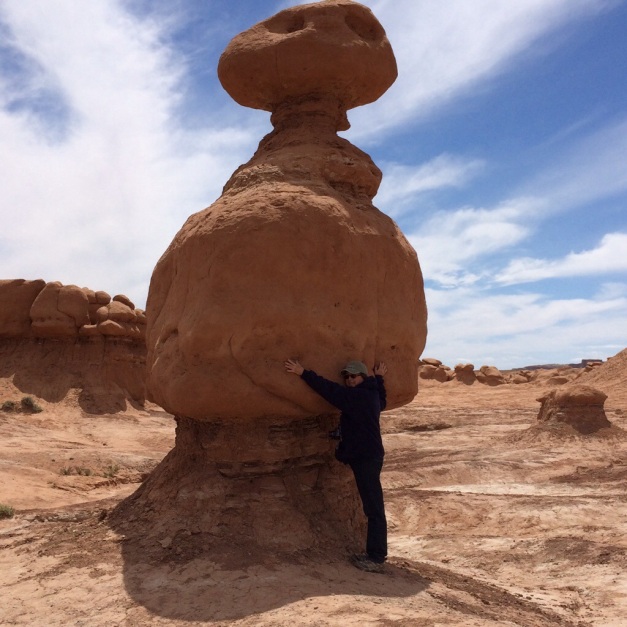 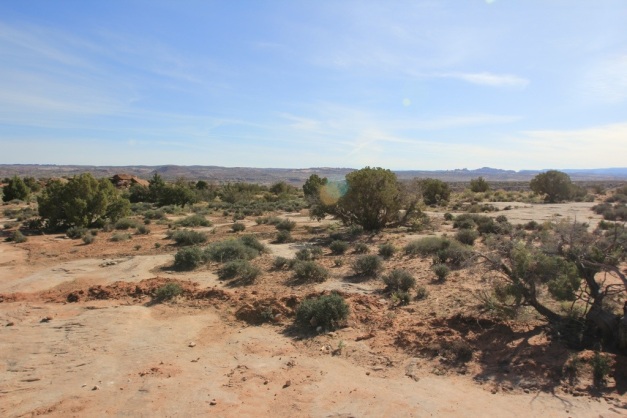 Ok the goblin that looks like ET got out of place, but you can see the view from our tent and the luxury we have. I like this camping! Did I mention I am doing this blog from the Peace Tree restaurant because we have no wifi or electricity in the tents!

We are a day behind on the blog because we didn’t have wifi at the Boulder Mountain Lodge. We were told it comes and goes, and right now it’s here so I will try to catch up. From Panguitch we took Utah Scenic Highway 12 to Boulder. Our trip led us past Bryce Canyon and on to the Grand Staircase Escalante. The scenery changes around every turn. The population of Boulder in 2012 was 220. It boasts two restaurants, one called Hell’s Backbone Kitchen, named after one of the local mountain trails. The food is organic and all local. Everyone here seems to have migrated from the 60’s and there are no signs of stress! Hmmmm…
We made a stop at the Petrified Forest State Park, then on to the Grand Staircase. All I can say is you had to be there! 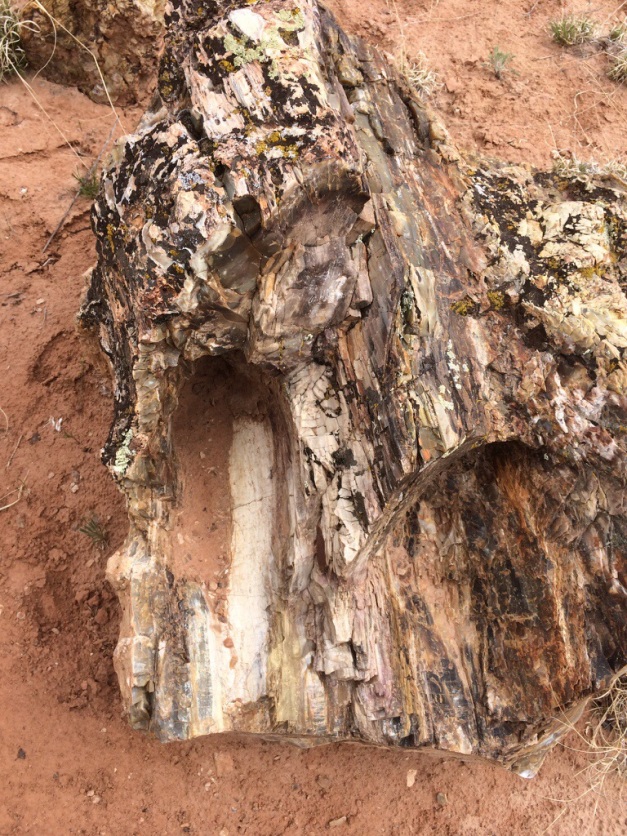 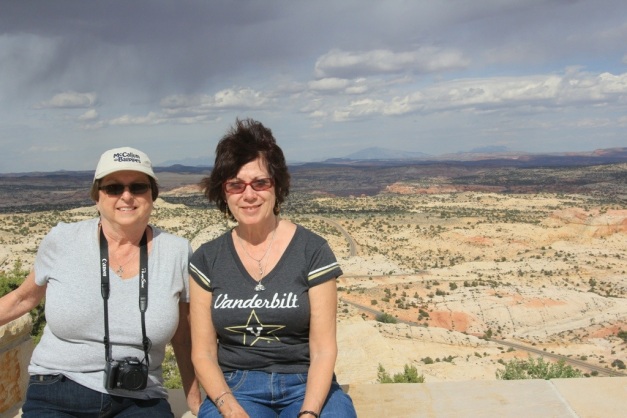 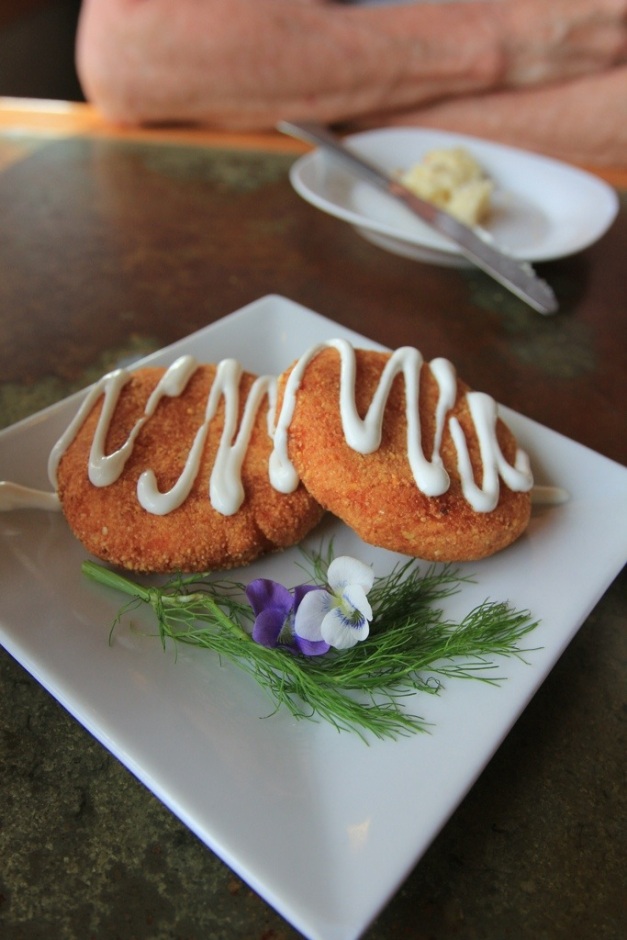 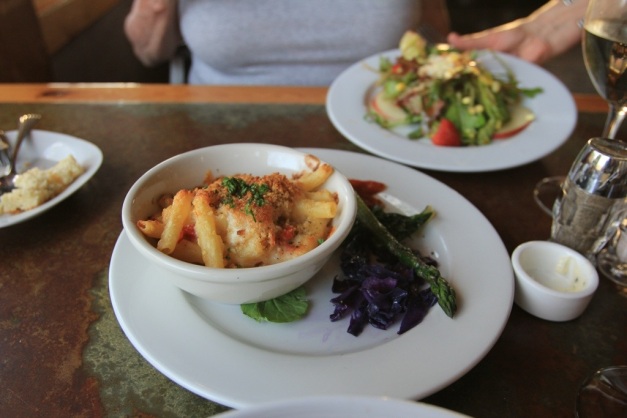 The best mac and cheese ever, and yes we bought the cookbook.

Braised beef with polenta and veggies, slow cooked, melt in your mouth.

Greekgirl777's Blog
Create a free website or blog at WordPress.com.